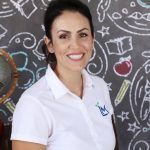 Jenni Nino is a wife and mother of three. She received her B.A. in Communications from University of California, Davis. She went on to earn her Multiple Subjects Teaching credential as well as her Masters in Education, from Teachers College of San Joaquin. Jenni then discovered her passion for teaching young children during her four years of teaching kindergarten for Stockton Unified School District. As the Director of Education of our school, she strives to ensure that each child reaches his/her own potential and to provide a caring atmosphere in which your child can learn. Jenni is very excited to have the opportunity to work with your child as they learn and grow with Lodi Montessori. When away from work Jenni enjoys exercising, spending time with family and friends, and supporting her children’s sports and activities.

“So many times during my tenure teaching kindergarten I observed that those children who were able to master the tasks presented, also developed a solid foundation to thrive with an eagerness to learn. Our goal is to provide our students with this solid foundation and to ignite their eagerness for learning.” -Jenni Nino 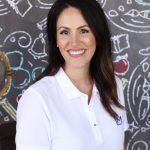 Jolie Zins received her Bachelors Degree from University of California, Davis and went on to explore a career in teaching. She began substitute teaching in the Lodi, Galt and Stockton school districts and quickly found her niche in the education field. She substituted at the Elementary, Middle, and High School levels, gaining eight years of teaching experience. After discovering her strong connection to the elementary aged children, Jolie decided to obtain her Multiple Subjects Teaching credential. She is extremely proud to be a part of Lodi Montessori, and works hard to ensure that each one of your children reaches his/her full potential. Jolie enjoys being outdoors, exercising, traveling, reading and spending time with her husband and three children.

“There is nothing more rewarding than knowing I have developed the educational foundation of each child I work with throughout preschool and to know that they are fully prepared for success in kindergarten and beyond.” -Jolie Zins 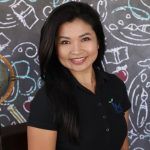 Vy Ergonis’ professional career has spanned 15 plus years in the Human Resources and Business Management/Administration field. Vy brings an extensive administrative and office management skill set, along with significant customer service experience and interaction with increasing levels of responsibility and proven capabilities.

Through her experience at major corporations such as Hewlett Packard and Adecco Group North America, Vy has developed the knowledge and skills in Business Management/Administration and Human Resources that will ensure a positive experience for both our students and their families. After joining Lodi Montessori, Vy returned to school to obtain a degree in Early Childhood Education. She enjoys hiking, gardening, and traveling with her husband and two young children.

“I admire the Montessori philosophy and its teachings. I have seen how much children are able learn with the hands-on Montessori materials available. I am extremely proud to be a part of this organization where I can use my work experience and education to give back to the children and parents in our community.” -Vy Ergonis 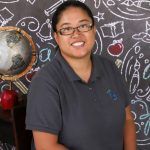 Alicia Dace first gained an interest in the education field while serving as a teacher’s aide and tutored in high school. She has earned her Associate’s Degree in Humanities, Social Sciences and Liberal Arts & Science, and her Associate’s Teacher certificate from San Joaquin Delta College. She has over eight years of experience working as a teacher’s aide in the Montessori setting, working with toddlers and preschool aged children. Alicia obtained her Montessori Certification through NAMC. When away from work, Alicia enjoys spending her time with family, traveling and reading.

“I have a lot of respect for the Montessori Method, and I admire its appreciation for each child’s independence and individuality. Children flourish greatly in this type of environment and I am very pleased to be a part of it.” -Alicia Dace 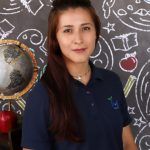 Virginia Robles earned her AA Degree in Child Development, as well as her Certificates of Proficiency for both Assistant Teacher and Associate Teacher.  She is continuing her education at Stanislaus State, to obtain her Bachelor’s in Social Science. She also hopes to become a certified Montessori teacher in the near future. Virginia first became familiar with the Montessori philosophy during her year spent at Stockton Montessori. While working as a teacher’s assistant there, she quickly developed a strong appreciation for Montessori’s focus on student’s individualism. Prior to that, Virginia has worked as a tutor for grades K through 6th at a charter elementary school in Oakland. She has a love for animals and enjoys learning new facts about them, particularly marine animals. She also loves dancing, writing and creating art.

“We discovered that education is not something which the teacher does, but that it is a natural process which develops spontaneously in the human being.” -Maria Montessori 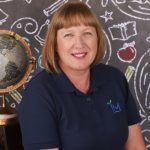 Carolynn Rafferty has been working with preschool and elementary school children for over 26 years. She had earned her Early Childhood Education credentials from James Watt College in Greenock, Scotland. After moving to California in 1998, she attended San Joaquin Delta College to continue her education in ECE. Carolynn started working as an Assistant Montessori preschool teacher in 2004, in the bay area. She later obtained her American Montessori Society Teacher Credential in 2014. Her goals for the children she works with are to help them build confidence and independence. Carolynn enjoys spending time with her family whenever she can. Watching soccer is also a leisure activity she enjoys. Her love for soccer does not just stop there. She also coaches for TOPSoccer, an organization that provides a supportive and inclusive atmosphere for children and adults with physical and mental disabilities.

“Never help a child with a task at which he feels he can succeed.” –Maria Montessori 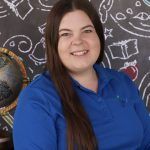 Lynzie Waddell first gained her drive for learning about child development when watching her niece and nephew. Once graduated from high school she decided to further her education in the early childhood education field at Cosumnes River College where she earned her Associates Degree. She is continuing her schooling to obtain her Bachelor’s Degree. Lynzie’s goal while interacting with children is to be able to help the child find their own desire to learn and guide them along the journey. When not in school, Lynzie enjoys spending time with her family, friends and farm animals which includes horses, cows and a potbelly pig named Petunia.

“If it hasn’t been in the hand and the body, it can’t be in the brain.” -Bev Bos

Ms. Sujeeva Sivaprasad has worked with Montessori preschool aged children for twenty-six years. She earned her Early Childhood Education and Montessori teaching credentials from the Montessori Teacher Education Center, in San Leandro. Her teaching experiences have included both the Montessori and traditional education system; however, the bulk of her years have been spent guiding her students through the Montessori methods, as this is where she feels most inspired. Ms. Sujeeva acknowledges that every child is an individual, with their own strengths and abilities. Therefore, she believes that a teacher’s role is to follow the child, while helping him/her learn through enthusiasm and confidence. She believes that the Montessori method provides a strong foundation for lifelong learning, which is why she chose the Montessori path for her own children. When there is down time, Sujeeva enjoys spending time with her two teenage children, traveling, cooking, and gardening.

“In every child is the seed that will mature into an adult.” -Maria Montessori

Kayla Garza became RBT (Registered Behavior Technician) certified in 2018 and has been working in both a general education setting and a special education setting since 2015. She is currently attending Grand Canyon University and working towards her Bachelor of Science degree in Early Childhood Education/Special Education. Kayla’s brother was diagnosed with autism spectrum disorder at a young age and since then, she has made educating children with and without exceptionalities her life’s work. She intends to grow within the Montessori education system, in the hopes that she can one day open her own Montessori School. Kayla feels that the Montessori method of education is one of the leading teaching styles and she herself learns best through the kinesthetic process. In her spare time, Kayla enjoys traveling, cooking, and spending time with loved ones.

“It is the supreme art of the teacher to awaken joy in creative expression and knowledge.” -Albert Einstein 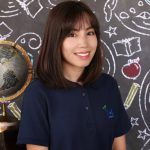 Rosa Nguyen gradually acquired an interest in childhood education after taking a child development course at San Joaquin Delta College. She received her Associate’s degrees from San Joaquin Delta College and continued to pursue her new interest in childhood education by earning a B.A. in Child Development and minor in Counseling from Sacramento State. At Sacramento State, she was able to volunteer at the child center where she worked in a Montessori based classroom. Rosa appreciates and respects Montessori education which values open-ended time and creating a child centered environment. She also believes that children are capable of great learning when given the freedom and time. Rosa hopes to continue to help young learners grow as she explores her own growth in working with children. Outside from work, she enjoys spending time with her family, dogs and friends. She loves dogs, dancing, traveling, and venturing out for good tasting food.

“What a child can do in cooperation today, he [or she] can do alone tomorrow.” -Lev Vygotsky, Psychologist